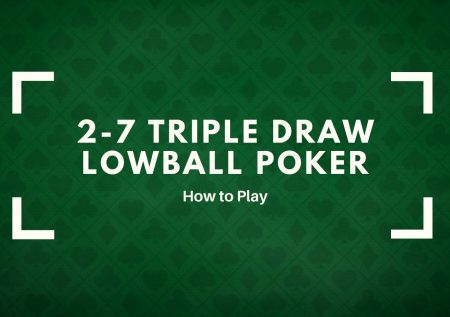 2-7 triple draw is a popular poker variation that has gained the attention of gamblers. As the game is appreciated a lot, let learn more about this poker variant and how to play it. Also, we will look at few strategies of 2-7 poker.

2-7 poker is a fixed limit game (like limit hold’em) therefore, there is a small as well as big bet. Thus, the bets are twice the blind as well as refer as the name of game. For example, if a game is 50c/$1 then the blinds will be 25c/50c. In this game, the bet will be 50c in the initial two rounds and $1 in the other two betting rounds.

Limit poker is a game where you may take time to adjust according to the different betting structures. The fold equity is lowered because each hand has 4 bets.

2-7 triple draw lowball is also known as Kansas City lowball is a game where players aim to make the worst poker hand. Yeah… In a game, the player needs to get the lowest five cards to win the bet.

Rules of this game

As the first betting round is finished, the player is directed to the first drawing round. Then players on the dealer’s left announce some cards they want to throw from their hands and receive new cards.

The dealer deals with the call the card of a player and then moves to another player if a player chooses to keep his card and not throw it is known as rapping pat.

If the player chooses to throw all the 5 cards, then the dealer will give them ou 4 new cards. 5th card is given only after all the players get their card. If it is the last player who discards all his cards then the dealer deals them with 4 cards and the last card is burn means it is faced down and given to the player.

After receiving cards again, the second round begins and it starts with the player left to the dealer. The game continues until one player is left while others are folded.

Rules of the game

These are the rules of a 2-7 triple-draw low ball. Now you can also practice and play the game with ease.

Thinking in Bets: How do you make strong decisions like Poker Players?
3 months ago